The adult bears a hard, thin calcareous shell 25–40 mm in diameter and 25–35 mm high, with four or five whorls. The shell is variable in color and shade but generally is dark brown, brownish golden, or chestnut with yellow stripes, flecks, or streaks (characteristically interrupted brown colour bands).The aperture is large and characteristically oblique, its margin in adults is white and reflected.

The body is soft and slimy, brownish-grey, and the animal retracts itself entirely into the shell when inactive or threatened. When injured or badly irritated the animal produces a defensive froth of mucus that might repel some enemies or overwhelm aggressive small ants or the like. It has no operculum; during dry or cold weather it seals the aperture of the shell with a thin membrane of dried mucus; the term for such a membrane is epiphragm. The epiphragm helps the snail retain moisture and protects it from small predators such as some ants.

Damage: Snails and slugs feed on a variety of living plants and on decaying plant matter. They chew irregular holes with smooth edges in leaves and flowers and can clip succulent plant parts. They also can chew fruit and young plant bark. 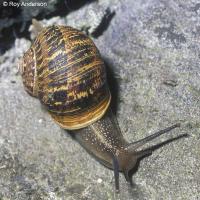 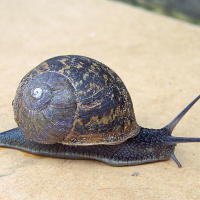 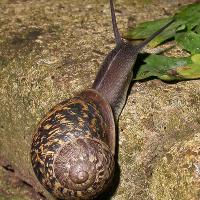 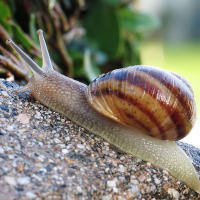 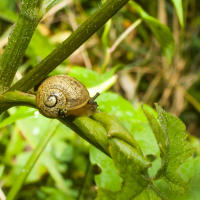