Banksias grow as trees or woody shrubs. Trees of the largest species, B. integrifolia (coast banksia) and B. seminuda (river banksia), often grow over 15 metres tall, some even grow to standing 30 metres tall. Banksia species that grow as shrubs are usually erect, but there are several species that are prostrate, with branches that grow on or below the soil.
The leaves of Banksia vary greatly between species. Sizes vary from the narrow, 1–1 1/2 centimetre long needle-like leaves of B. ericifolia (heath-leaved banksia), to the very large leaves of B. grandis (bull banksia), which may be up to 45 centimetres long. The leaves of most species have serrated edges, but a few, such as B. integrifolia, do not. Leaves are usually arranged along the branches in irregular spirals, but in some species they are crowded together in whorls. Many species have differing juvenile and adult leaves (e.g., Banksia integrifolia has large serrated juvenile leaves).
The character most commonly associated with Banksia is the flower spike, an elongated inflorescence consisting of a woody axis covered in tightly-packed pairs of flowers attached at right angles. A single flower spike generally contains hundreds or even thousands of flowers; the most recorded is around 6000 on inflorescences of B. grandis. Not all Banksia have an elongate flower spike, however: the members of the small Isostylis complex have long been recognised as Banksias in which the flower spike has been reduced to a head; and recently the large genus Dryandra has been found to have arisen from within the ranks of Banksia, and sunk into it as B. ser. Dryandra. Thus fewer than half of the currently accepted Banksia taxa possess the elongated flower spike long considered characteristic of the genus.
Banksia flowers are usually a shade of yellow, but orange, red, pink and even violet flowers also occur. The colour of the flowers is determined by the colour of the perianth parts and often the style. The style is much longer than the perianth, and is initially trapped by the upper perianth parts. These are gradually released over a period of days, either from top to bottom or from bottom to top. When the styles and perianth parts are different colours, the visual effect is of a colour change sweeping along the spike. This can be most spectacular in B. prionotes (acorn banksia) and related species, as the white inflorescence in bud becomes a brilliant orange. In most cases, the individual flowers are tall, thin saccate (sack-shaped) in shape.
Occasionally, multiple flower spikes can form. This is most often seen in Banskia marginata and B. ericifolia.
As the flower spikes or heads age, the flower parts dry up and may turn shades of orange, tan or dark brown colour, before fading to grey over a period of years. In some species, old flower parts are lost, revealing the axis; in others, the old flower parts may persist for many years, giving the fruiting structure a hairy appearance. Old flower spikes are commonly referred to as "cones", although they are not technically cones according to the botanical definition of the term: cones only occur in conifers and cycads.
Despite the large number of flowers per inflorescence, only a few of them ever develop fruit, and in some species a flower spike will set no fruit at all. The fruit of Banksia is a woody follicle embedded in the axis of the inflorescence. In many species, the resulting structure is a massive woody structure commonly called a cone. Each follicle consists of two horizontal valves that tightly enclose the seeds. The follicle opens to release the seed by splitting along the suture, and in some species each valve splits too. In some species the follicles open as soon as the seed is mature, but in most species most follicles open only after stimulated to do so by bushfire. Each follicle usually contains one or two small seeds, each with a wedge-shaped papery wing that causes it to spin as it falls to the ground. 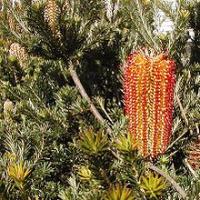 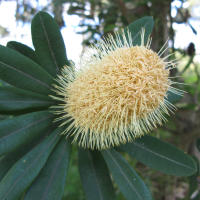 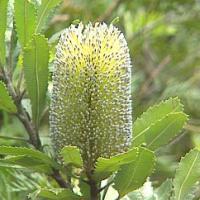 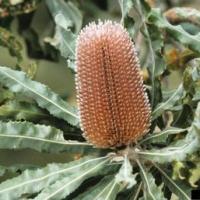 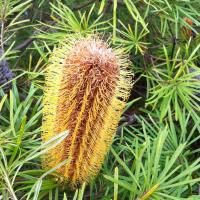 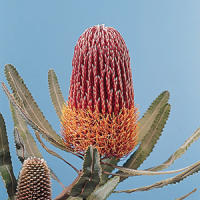 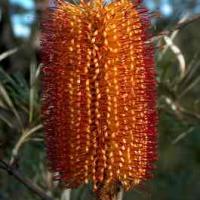 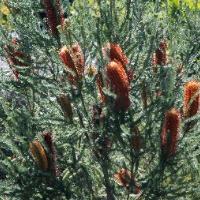 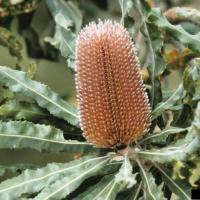