Powdery Mildew of Appricots and Peaches and Cherries
Podosphaera clandestina

Symptoms: The fungus attacks leaves and twigs, producing symptoms much like powdery mildew on apple. On young leaves, the fungus appears as whitish, feltlike patches (photo 2-72). Newly developed leaves on new shoot growth become progressively smaller, are generally pale in color, and somewhat distorted. Severely infected leaves curl upward, become brittle with age, and may drop prematurely. By mid-season, the whitish fungal growth can be seen abundantly growing over the leaves and shoots, sometimes in patches and other times covering most of the new growth. These symptoms are especially common in nurseries.
Disease Cycle: The fungus may overwinter on diseased, fallen leaves, but it does so more commonly in infected buds, as in the case of apple powdery mildew. When infected buds expand in the spring the new growth becomes completely colonized by the fungus. Much of the visible white growth consists of masses of conidia, which are spread by wind to other new leaf and shoot growth. Warm temperatures without rain, but with sufficient moisture such as high humidity, morning fogs, dews, or intermittent rains, are ideal for rapid increase of the disease. 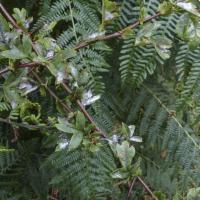 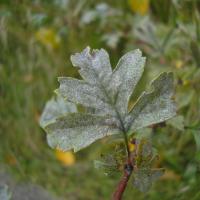 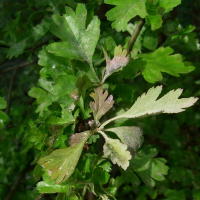