Description. Multicolored Asian lady beetles are slightly larger than native lady beetles, with adults measuring 9/32 inch (7 mm) long and 7/32 inch (5.5 mm) wide. They are oval or convex in shape, and yellow to red in color (with or without black spots on the wing covers). The beetles’ spots, which can vary in size and pattern, number from no spots to as many as nineteen. The head is usually concealed beneath the disk-shaped pronotum, which is cream to yellow in color with a black ‘M’ design in the center. Asian lady beetle larvae are elongated, flattened, and covered with minute tubercles or spines. The eggs, which are laid upright in clusters of about twenty, are oval and yellow.
Life History. In Pennsylvania, the life cycle from egg to adult to egg takes about three to four weeks depending on temperature and food abundance. There are multiple generations per year. The eggs are laid on the undersides of leaves of low-growing ornamentals, forest trees, roses, wheat, tobacco, soybean and numerous other plants. They take from three to five days to hatch. During the first twelve to fourteen days after hatching, the larvae use their chewing mouthparts to feed on aphids. Adults emerge several days after pupation and can live for more than one year.
Beginning about the first of October, during a sunny, warm afternoon following a cold night, the multicolored Asian lady beetles congregate outside houses, sheds, and other buildings in search of overwintering sites. The beetles are apparently attracted to the sunlight reflecting off of the south or southwest-facing sides of the building. A similar behavior is seen in their native Japan where the beetles fly to south-facing rock cliffs and outcroppings. There they enter cracks and crevices to overwinter. Females overwinter (without mating) along with the aggregate population. Mating occurs later the next spring. 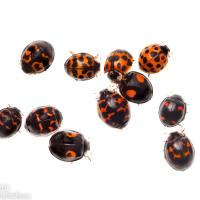 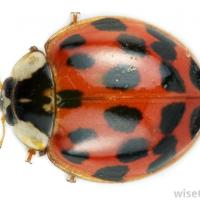 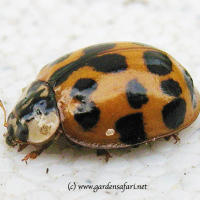 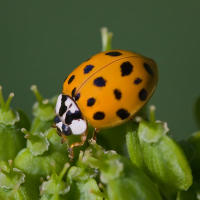