The second-stage juvenile, or J2, nematode is the only life stage that can penetrate roots. (The first-stage juvenile occurs in the egg, and third- and fourth-stages occur in the roots). The J2 enters the root moving through the plant cells to the vascular tissue where it feeds. The J2 induces cell division in the root to form specialized feeding sites. As the nematode feeds, it swells. The female swells so much that her posterior end bursts out of the root and she becomes visible to the naked eye. In contrast, the adult male regains a wormlike shape, and he leaves the root in order to find and fertilize the large females. The female continues to feed as she lays 200 to 400 eggs in a yellow gelatinous matrix, forming an egg sac which remains inside her. She then dies and her cuticle hardens forming a cyst. The eggs may hatch when conditions in the soil are favorable, the larvae developing inside the cyst and the biological cycle repeating itself. There are usually three generations in the year. In the autumn or in unfavorable conditions, the cysts containing dormant larvae may remain intact in the soil for several years. Although soybean is the primary host of SCN, other legumes can also serve as hosts. 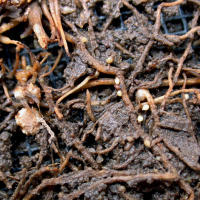 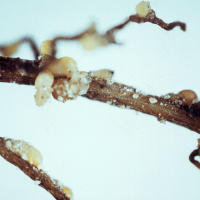 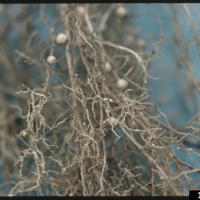