Biology. The woolly elm aphid overwinters as an egg in bark crevices on elm. In the spring eggs hatch and female aphids emerge. These females feed on foliage, causing the leaves to curl, forming a protective enclosure. The females mature within the leaf curl and give rise to a large second generation of females, most of which develop into winged aphids. These winged aphids migrate from elm to saskatoon in late June until early July. Once a winged female lands on a saskatoon plant, they immediately deposit about 14 female nymphs on the underside of the leaves. These tiny yellow aphid nymphs make their way down the plant to the roots beneath the soil surface. Underground, they will become light-grey to blue, soft-bodied aphids, which will establish a colony that will produce two more generations of females. In August and into September, winged adult females are again produced that migrate back to the elms. Here, male and female aphids are produced that mate, and the females lay the eggs that overwinter.
Symptoms and Damage. Saskatoon plants damaged by the woolly elm aphid may not show any symptoms until the following spring. In spring, damaged plants will break bud, produce a few small leaves and may die. Saskatoon plantings are susceptible in the year of establishment, but are most susceptible in the second and third growing season. Older plants may support populations of the aphid, but are not likely to be killed. Vigour and fruit production by older plants will be reduced by the aphid. 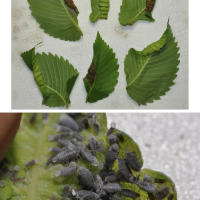 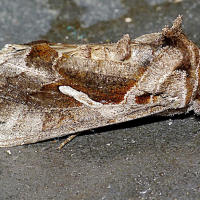 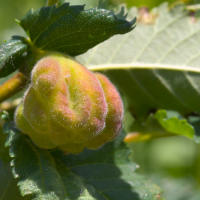 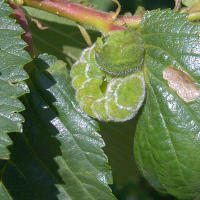 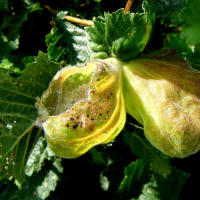