Fiddle Dock is a rosette forming plant with rounded oblong leaves, the basal ones are 40-150 mm long and often slightly constricted in the middle to appear fiddle-shaped. The basal leaves have long petioles and the stem leaves are smaller. The erect stems which grow to about 500 mm tall have almost horizontal and wiry branches carrying many rings of toothed, 3 sided fruit. Each flower has small floral segments, 6 stamens and 3 styles. The fruit valves are brown, swollen and warty in the centre and the margin has prominent stiff teeth.
The stems turn red brown on senescence and persist over summer. It has a perennial, over summering, carrot like rootstock with annual top growth. It flowers from September to December.
Each year new leaves arise from the perennial rootstock. It is native to the Mediterranean region and south-west Asia and has become a common weed of creeklines, pastures, crops and waste land. It flowers in spring and early summer.
Each year new leaves arise from the perennial rootstock. 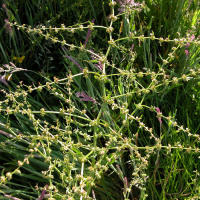 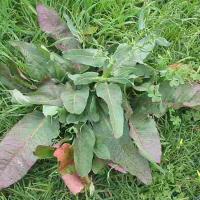 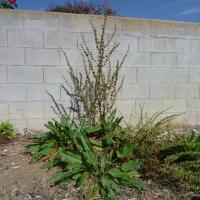 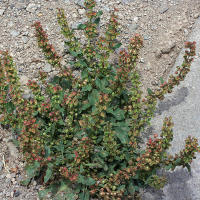