Description
C. sativus is an ascomycetous fungus (order Pleosporales), however, the teleomorph is not involved in disease epidemiology. Pseudothecia are dark-brown to black, bottle-shaped, up to 530 µm wide, with a cylindrical to paraboloid pore 80-110 µm long. Asci are cylindrical to claviform, 1-8 spored, bitunicate, 110-230 x 30-45 µm. Ascospores are hyaline to light-brown, 6-13 septate, filiform, coiled in a helix in the ascus, often surrounded by a thin, mucilaginous sheath, and 160-360 x 6-9 µm. Pseudoparaphyses are hyaline, filiform and branched.

Damage
Depending on the cultivation area and climatic conditions, C. sativus may affect all parts of wheat plants causing various diseases:
Seedling blight with first symptoms as brown lesions on coleoptiles, sub-crown internodes, roots and culms of seedlings. Colonization of the basal stem causes highest damage. Early infections may not produce symptoms, but result in reduced leaf area at GS 12 when the number of tillers is determined, limiting plant density and yield.
Common root rot, caused by C. sativus or often in a complex with Fusarium spp., is associated with dark-brown or blackened sub-crown internodes and roots. Due to the incidence the disease is hard to diagnose. Infection may extend into the crown and reach the culm. Diseased plants occur randomly or in irregular patches and are stunted and often chlorotic. Leaf spots (spot blotch) due to C. sativus often coincide with root infections that advance to foot and basal stem, and are favored by rainy periods. Distinct, elongate, brown-black lesions rarely exceeding 10 mm in diameter are most noticeable after heading and most frequent on lower leaves.
Head blight (premature blight) due to C. sativus is associated with premature bleaching of one or more spikelets or the entire head on emerged and immature heads. The tissue above infected parts of the rachis is affected producing sterile spikelets or shrivelled, discolored seeds (black point).

Cause
Airborne secondary inoculum cause foliar disease and reduces grain yield. Infection of leaves depends on high relative humidity and is favored by warm weather. Early infections at heading cause higher losses than later ones. C. sativus produces various phytotoxins with prehelminthosporol being the main toxic compound; it interferes with enzyme activities in the host plasma membranes and affects synthesis of 1,3-beta-glucan, proton pumping and ATP dependent Ca2+ transport. Non-selective toxins produced by C. sativus can induce chlorophyll loss. 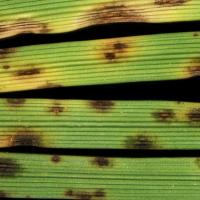 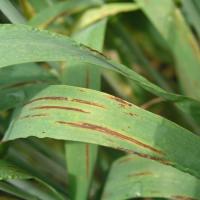 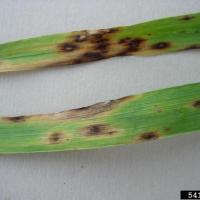