The adult moths have a wing span of 8-9mm and the forewings are shining white with brownish markings towards the wing tips. The caterpillars feed within the leaves of host plants and are greenish and up to 8mm long when fully grown.

Symptoms
There are up to three generations od apple leaf miner during the summer although it is usually only the final generation of caterpillars in August to early October that is sufficiently numerous to attract attention. Host plants include apple, cherry, ornamental Prunus, and less frequently, hawthorn and birch.

The mine is a long, narrow and sinuous tunnel which can be seen as a whitish or brown line on the upper leaf surface. In late summer some apple trees can have a large proportion of their leaves mined and some leaves may contain many caterpillars. This can result in areas of some leaves dying and dropping out.

hen the larvae have finished feeding they emerge from the leaf and spin small silken cocoons, which are suspended like hammocks from the underside of the leaf. Adults of the final generation emerge during October and they overwinter in sheltered places before laying eggs in April to June. 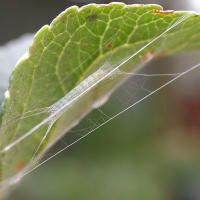 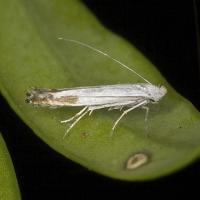 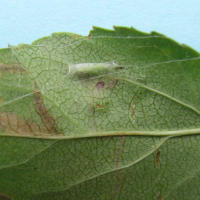 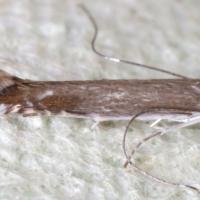 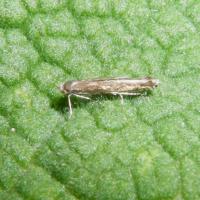