Symptoms
H. rapax initially infests the bark and the axils of leaves, but as the infestation increases, it spreads to other parts of the host plant.

The cover of the females is subcircular to elongate, and varies from grey to white with the dark exuviae placed slightly off-centre. Male covers are smaller, ovoid, with the tan to light-brown exuviae located at the anterior end. Adult males have well-developed legs, one pair of simple wings, long antennae, very long genitalia and no mouthparts. The body of slide-mounted female is pear-shaped, about 1-1.5 mm long, yellow, with a membranous derm. The pygidial area is distinguished by the presence of well developed paraphyses, but lacks perivulvar pores. A small pair of plates are located between a large, but closely set, pair of median lobes. The second and third lobes are reduced to unsclerotized points. Two large plates occur in the first interlobular space, three between the second and third, and two or three beyond the third space. A few dorsal ducts are present on the posterior segments and numerous ventral microducts occur on all abdominal segments. 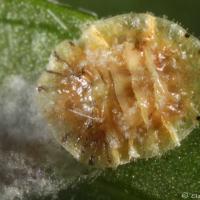 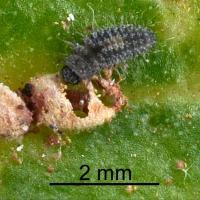 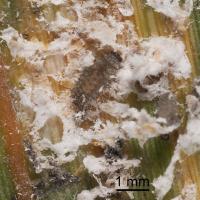 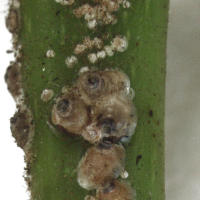