Corms and cormils start to grow in late autumn and foliage is produced during the winter. Flowering stems are produced in spring and flowering occurs mainly in November and December. Plants that develop from cormils do not flower in the first year but produce theirfirst corm, and flower in their second or third years. Plants become dormant in late summer and autumn when the foliage and stems die off. The plant reproduces by replacement and multiplication of the underground corms and by cormils.

Stems – bearing 10 to 15 flowers on the main axis; straight, erect, rigid, up to 3 cm diameter and 2 m high,often maroon to red in colour (varying seasonally), cylindrical at the base, fluted in the upper section, unbranched or with 6 to 8 short branches; one stem per plant; brown spiky clusters of cormils form at nodes along the stems.

Leaves - 20 to 80 cm long, 2 to 5 cm wide, light green, rigid, upright, shaped like the blade of a sword, tough, fibrous, lacking hairs; with a prominent central midrib and numerous smaller parallel veins; growing in clusters of 6 to 10 united at the base and ascending fan-like from the top of the corm. The stem carries small, sheath-like leaves.

Flowers - curved trumpet-shaped, with 6 'petals' (perianth segments) forming a tube in the lower section of theflower; usually orange in colour but varying from brick red, through salmon-red to dull pink, 5 to 8 cm long, 3 to 4 cm in diameter, arranged singly, 2.5 to 4 cm apart, in opposite rows along the upper part of the stem and on side branches; three stamens arranged asymmetrically on one side of the flower; anthers about 10 mm long, cream or purple; perianth lobes (the outer sections of the 'petals') 1.7 to 2.6 cm long, upper lobe less than twice as long as lower and usually about the same length. 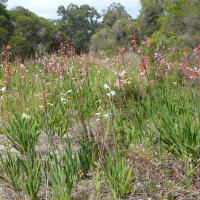 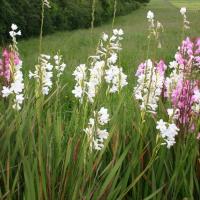 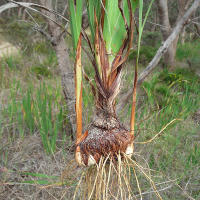 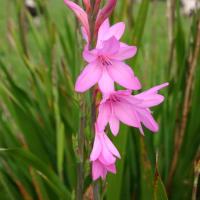