Identification & Distribution:
Sitobion avenae is a medium-sized spindle-shaped aphid. It shows colour polymorphism with green and brown forms predominating. The antennae are black and somewhat shorter than the body. The legs are yellow but with the tips of femora, tarsi and tibiae dark. The siphunculi are cylindrical and black and somewhat longer (1.1 - 1.5 ×) than the pale pointedcauda. The body length of the aptera is 1.3 - 3.3mm long. The alate is 1.6 - 2.9mm long and also occurs in two colour forms - green and brown. The alate has distinct dark intersegmental markings on the upper surface of the abdomen.
There is no host alternation and the species spends its entire year on cereals and grasses. It occurs on all cereals including rice and maize and can develop on most grasses (Poaceae), as well as on some rushes (Juncaceae) and sedges (Cyperaceae). The majority of the population is anholocyclic (produces only asexual morphs) and overwinters as nymphs or apterae on grasses or winter cereals, but a small proportion of the population is holocyclic (alternates parthenogenetic with sexual reproduction) and overwinters as eggs which hatch in March. Sitobion avenae is widespread throughout the world, with a preference for temperate climates. It occurs widely in Europe, North Africa, the Middle East and Asia. 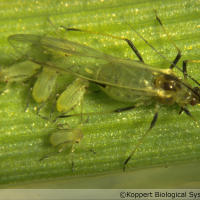 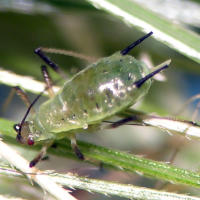 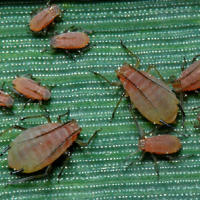