Fungus gnats are small flies that infest soil, potting mix, other container media, and other sources of organic decomposition. Their larvae primarily feed on fungi and organic matter in soil, but also chew roots and can be a problem in greenhouses, nurseries, potted plants and interior plantscapes. Adult fungus gnats may emerge from houseplants indoors and become a nuisance.
IDENTIFICATION. Fungus gnats (Orfelia and Bradysia species), also called darkwinged fungus gnats (Sciaridae), are dark, delicate-looking flies similar in appearance to mosquitoes. Adult fungus gnats have slender legs with segmented antennae that are longer than their head. Their long antennae distinguish them from the more robust shore flies, which are also found in greenhouses, associated with algae and decomposing organic matter, but have short bristle-like antennae. Although a few species are up to 1⁄2 inch long, fungus gnat adults commonly are about 1⁄16 to 1⁄8 inch long. Wings are light gray to clear, and the common Bradysia species have a Y-shaped wing vein.
Because adult fungus gnats are attracted to light, you first might notice these pests flying near windows indoors. However, in comparison with more active species such as the common housefly (Musca domestica), fungus gnats are relatively weak fliers and usually don’t move around much indoors. Fungus gnats often remain near potted plants and run across (or rest on) growing media, foliage, compost, and wet mulch piles.
Females lay tiny eggs in moist organic debris or potting soil. Larvae have a shiny black head and an elongated, whitish-to-clear, legless body. They eat organic mulch, leaf mold, grass clippings, compost, root hairs, and fungi. If conditions are especially moist and fungus gnats are abundant, larvae can leave slime trails on the surface of media that look like trails from small snails or slugs.
DAMAGE. Adult fungus gnats don’t damage plants or bite people; their presence is primarily considered a nuisance. Larvae, however, when present in large numbers, can damage roots and stunt plant growth, particularly in seedlings and young plants. Significant root damage and even plant death have been observed in interior plantscapes and in houseplants when high populations were associated with moist, organically-rich soil. Thus, a houseplant that is wilting may not indicate a lack of water, but rather root damage by fungus gnat larvae or (more commonly) other causes of unhealthy roots. However, too much or too little water, root decay fungi, and improper soil conditions (e.g., poor drainage, or waterlogging) are much more common causes of wilted plants.
Serious fungus gnat damage is more common in greenhouses, nurseries, and sod farms. Although larvae also feed on plant roots outdoors, they don’t usually cause serious damage.
LIFE CYCLE. Fungus gnats develop through four stages—egg, larva (with four larval stages or instars), pupa, and adult. The tiny eggs and oblong pupae occur in damp organic media where females lay eggs and larvae feed. At 75 F, eggs hatch in about 3 days, the larvae take approximately 10 days to develop into pupae, and about 4 days later the adults emerge. A generation of fungus gnats (from female to female) can be produced in about 17 days depending upon temperature. The warmer it is, the faster they will develop and the more generations will be produced in a year.
Fungus gnats have many overlapping generations each year. Outdoors, they are most common during winter and spring in interior areas of California, when water is more available and cooler temperatures prevail. They can occur during any time of the year in moist coastal regions and indoors. 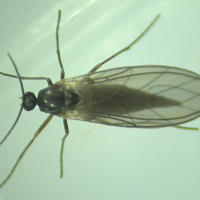 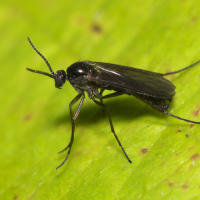 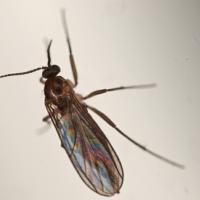