Description
Stem rust is caused by P. graminis, a basidiomycete belonging to the uredinales. The fungus exists in several races. It is a macrocyclic, heteroecious rust, with five distinct spore stages.
Like most rust fungi it requires two taxonomically diverse hosts to complete its life cycle. The primary host is wheat.

Damage
First symptoms formed by the uredinia may occur on leaves, stems, leaf sheaths, spikes, glumes, and awns, but stems and leaf sheaths are the main tissues affected. On stems, the uredinia are elongated and reddish-brown; loose epidermal tissue is conspicuous at the margins of the uredinia. The uredinia coalesce to cover large areas of the host tissue in heavy infection. Since the orange-red urediniospores are dehiscent, they are readily released as masses from the uredinia when touched. The teliospores occur in the same tissue, but becomes shiny-black. The pycnial stage appears on the young leaves of the alternate host Berberis vulgaris initially as light, chlorotic areas on the adaxial leaf surface, then become light orange-brown lesions, consisting of individual small cone-shaped eruptions (the pycnia), often occurring in clusters. The aecia develop on the abaxial surfaces of these leaves. When mature, they appear as bright-orange, closely-packed, raised clusters of individual aecia. The aecia are cylindrical in shape and flare out at their apices, appearing as a grouping of rings within the aecial cluster.

Cause
The uredinial stage is initiated by germination of a urediniospore in the presence of free water, formation of appressoria and penetration through stomata, development of an intracellular mycelium with intracellular haustoria, and subsequent sporulation of uredinia to form new urediniospores. The dikaryotic urediniospores of P. graminis are orange-red, thick-walled and covered with spines. They are elliptical and about 20 x 30 µm. As infected plants mature, teliospore formation commences, either in the same, or in new (telia), fruiting structures. At this stage, the infections become black, hence the name black rust. The teliospores remain attached. The teliospores are dark brown two-celled and somewhat wedge-shaped. 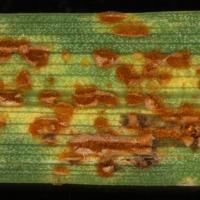 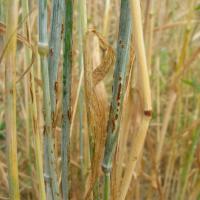 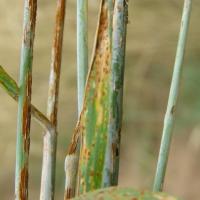