Chrysoperla carnea, known as the common green lacewing, is an insect in the Chrysopidae family. It is found in many parts of America, Europe and Asia. Although the adults feed on nectar, pollen and aphid honeydew, the larvae are active predators and feed on aphids and other small insects. It has been used in the biological control of insect pests on crops.

Chrysoperla carnea was originally considered to be a single species with a holarctic distribution but it has now been shown to be a complex of many cryptic, sibling subspecies. These are indistinguishable from each other morphologically but can be recognised by variations in the vibrational songs the insects use to communicate with each other, which they especially do during courtship.

The green lacewing eggs are oval and secured to the plant by long slender stalks. They are pale green when first laid but become gray later. The larvae are about one millimetre long when they first hatch. They are brown and resemble small alligators, crawling actively around in search of prey.They have a pair of pincer-like mandibles on their head with which they grasp their prey, sometimes lifting the victim off the leaf surface to prevent its escape. The larvae inject enzymes into the bodies of their victims which digest the internal organs, after which they suck out the liquidated body fluids.The larvae grow to about eight millimetres long before they spin circular cocoons and pupate.

Adult green lacewings are a pale green colour with long, threadlike antennae and glossy, golden, compound eyes. They have a delicate appearance and are from twelve to twenty millimetres long with large, membranous, pale green wings which they fold tent-wise above their abdomens. They are weak fliers and have a fluttery form of flight. They are often seen during the evenings and at night when they are attracted by lights. The high green sensitivity of the superposition eyes allows the green lacewings to recognize fresh green leaves that they use to find honey dew produced by aphids, a site for egglaying and a resting place. 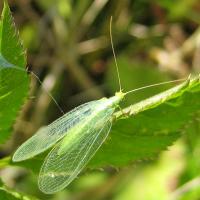 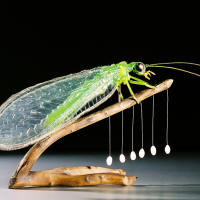 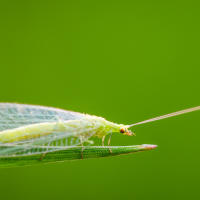 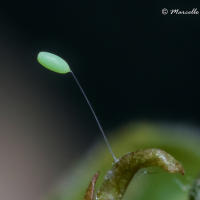