Black rot, caused by the bacterium Xanthomonas campestris pv. campestris, is one of the most destructive diseases of cabbage and other crucifers. Cauliflower, cabbage, and kale are among the crucifers most susceptible to black rot.

Plants may be affected with black rot at any stage of growth. Seedling infection first appears as a blacking along the margin of the cotyledon (seed leaves), which later shrivels and drops off. Affected seedlings turn yellow to brown, wilt, and collapse. Leaf infections often result in a small, wilted, V-shaped infected area that extends inward from the leaf edge toward the midrib. Diseased areas enlarge and progress toward the base of the leaf, turn yellow to brown, and dry out. The veins of infected leaves, stems, and roots turn black as the pathogen multiplies.

On cauliflower, black rot commonly appears on leaves as numerous, minute brown specks. The infected lower leaves of cabbage and cauliflower are usually stunted, turn yellow to brown, wilt, and drop prematurely. In extreme cases, heading may be prevented. A typical cross-section of an infected stem or petiole shows a black ring due to invasion of the water-conducting vessels. Dwarfing or one-sided growth is common both in individual leaves and in entire plants. These symptoms also are commonly associated with a disease called Fusarium yellows. However, the presence of black veins in yellowish, V-shaped diseased areas along the leaf margins is diagnostic of black rot. 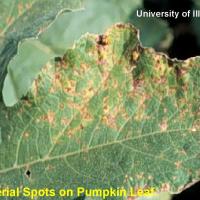 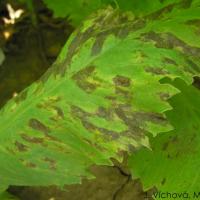 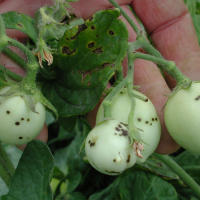 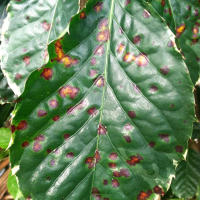