This herbaceous perennial plant is about 1-3' tall, branching occasionally. The hairless stems are more or less ascending, often relying on adjacent vegetation for support. Because the stems are produced in abundance from rhizomes, Crown Vetch often forms a dense layer of leafy vegetation that excludes other plants. The alternate compound leaves are about 6" long when fully mature; they are odd-pinnate with 11-25 leaflets. Each leaflet is about ¾" long, ¼" across, oblong, hairless, and smooth along the margins. Each compound leaf is more or less sessile because its first pair of leaflets occurs near the stem. Tendrils are not produced. From the axils of the upper compound leaves, there develops individual flowering stalks up to 6" in length. At the apex of each stalk, there is an umbel of 10-25 flowers.
Each flower is about ½" long, consisting of 5 pink or white petals and a green calyx with 5 pointed lobes. The flower of Crown Vetch has a typical pea-like appearance, with an upright standard and a lower keel. The standard is often a brighter shade of pink than the rest of the flower. The slender pedicel of each flower is about ¼" long. The blooming period occurs from late spring until late summer, peaking during early and mid-summer for about 2 months. Each fertile flower produces an angular seedpod about ½–2" long. This seedpod consists of 1-7 segments; it is constricted between these segments and terminates in a long pointed beak. Each seed is oblong and slightly reniform. The root system produces abundant spreading rhizomes. This plant often forms vegetative colonies, and it occasionally reseeds itself. 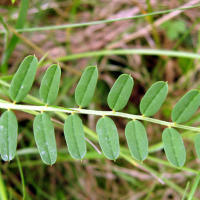 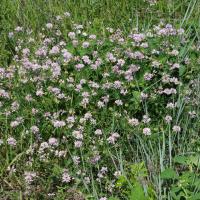 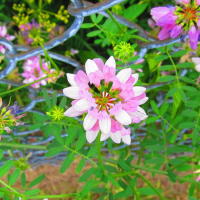 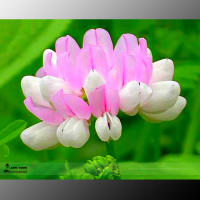 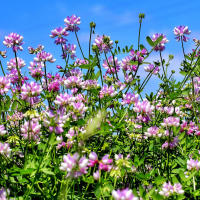 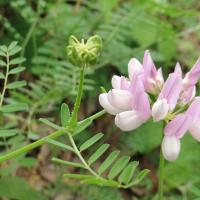