Dodder is a genus of about 100–170 species of yellow, orange, or red (rarely green) parasitic plants.
Dodder can be identified by its thin stems appearing leafless, with the leaves reduced to minute scales. In these respects it closely resembles the similarly parasitic, but unrelated genus Cassytha. From mid-summer to early autumn, the vines can produce small fruit that take the same color as the vine, and are approximately the size of a common pea. It has very low levels of chlorophyll; some species such as Cuscuta reflexa can photosynthesize slightly, while others such as C. europaea are entirely dependent on the host plants for nutrition.
Dodder flowers range in color from white to pink to yellow to cream. Some flower in the early summer, others later, depending on the species. The seeds are minute and produced in large quantities. They have a hard coating, and typically can survive in the soil for 5–10 years, sometimes longer.
Dodder seeds sprout at or near the surface of the soil. Although dodder germination can occur without a host, it has to reach a green plant quickly and is adapted to grow towards the nearby plants by following chemosensory clues. If a plant is not reached within 5 to 10 days of germination, the dodder seedling will die. Before a host plant is reached, the dodder, as other plants, relies on food reserves in the embryo; the cotyledons, though present, are vestigial.
Folk names include: strangle tare, scaldweed, beggarweed, lady's laces, fireweed, wizard's net, devil's guts, devil's hair, devil's ringlet, goldthread, hailweed, hairweed, hellbine, love vine, pull-down, strangleweed, angel hair, and witch's hair. 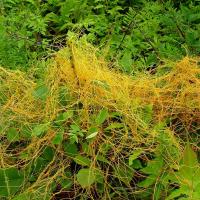 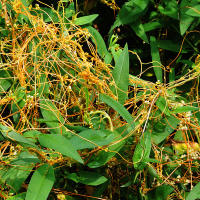 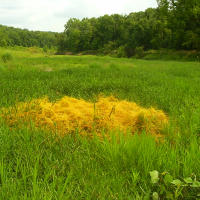 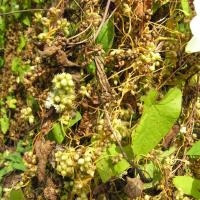