Leaf mustard is a cool-season annual, usually grown for its variable, glabrous, rather thin basal leaves which are eaten raw or cooked like spinach. As day length increases, mustard bolts up with a 3 ft (0.9 m) stalk supporting bright yellow flowers that soon develop into sickle-shaped green seed pods. Several varieties have been named, and many cultivars have been selected, especially in China where B. juncea has been developed into a remarkable array of different vegetables. The most popular cultivars grown in the US for mustard greens are 'Southern Giant Curled', which has 15 in ( cm) elongate leaves with frilled, crumpled margins, and 'Florida Broadleaf', which has flat, oval leaves to 2 ft (0.6 m) long and 1 ft (0.3 m) wide, and is easy to clean. Several newer cultivars have been developed which are said to be slower to bolt. Among the many Asian cultivars are 'Green-in-Snow', which is smaller with pale green leaves, and often used in stir-fry or pickled; 'Osaka Purple-Leaved' which has mild-tasting purple-red leaves with white veins to 26 in ( cm) long, and is often used raw in salads; and 'Red Giant' which has dark red, crinkled leaves and white stems that are pickled. 'Tai Tau Choi' is grown for its roots which are similar to turnips. 'Cha Tsoi' is grown for its peculiar swollen stems with knobby bulges that are preserved in salt and pressed flat until most of the juice is removed. 'French Brown', 'Burgonde' and 'Tilney' are grown in Europe for the seeds which are made into pungent, brown, stone-ground, French and German mustard sauces. 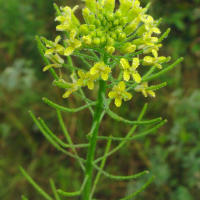 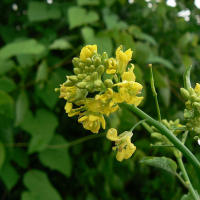 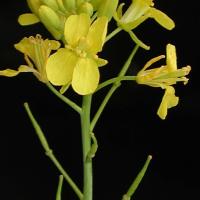 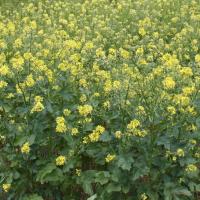