Eggs are small (about 1/32 inch long), flat, iridescent, elliptical structures laid singly on the underside of a leaf, often in the angles between a vein and the leaf surface.
Larvae are 3/4 inch long when fully grown. They are glossy, translucent yellow-green on the sides and somewhat darker above, with scattered fine yellow hairs on each segment. The head and prothoracic shield are light brown, and there are light brown spots on the sides of the first two thoracic segments. Larvae wiggle vigorously when disturbed and drop to the ground.
Pupae average a little over 1/2 inch long; they are light brown just after pupation, but soon turn dark.
Adults have a wing expansion varying from about 4/5 inch to nearly 1 1/4 inches. The color of the wings is very dark brown, almost black, with a silvery or bluish iridescence. The forewings in both sexes have two nearly oval white spots. The hind wings of the male have one white bar which in the female is partly or completely divided into two spots. Both sexes have various amounts of white on the fringes of the wings and parts of the head, body, and legs. The antennae in the male appear thickened and notched near the middle, while in the female they are uniform and threadlike. Adults of other species of Desmia and certain other similar species in Florida have the white spots of the wings much more linear or are obviously different in number of spots or some other characteristic. 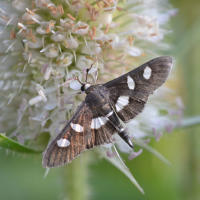 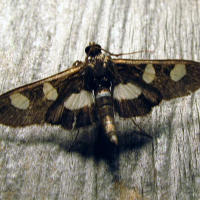 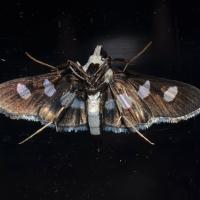 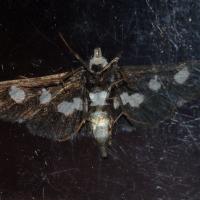 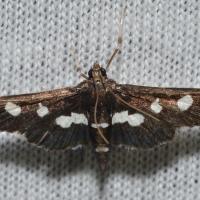 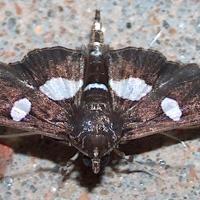 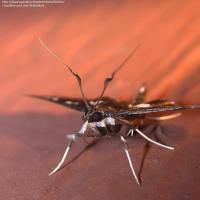