Female San Jose scales give birth to living young that emerge from under the edge of the scale covering. These tiny yellow crawlers wander in a random fashion until they find a suitable place to settle. Immediately upon settling, the crawlers insert their mouthparts into the host plant and begin feeding and secreting a white waxy material (white cap stage); eventually the waxy covering turns black and is known as the black cap stage. Later the covers turn various shades from gray to black.

San Jose scales overwinter predominantly in the black cap stage, although in mild years some adult mated females may also survive. In late January, these nymphs resume their growth. Immature male and female scales are indistinguishable until the first molt. At this time, the male scale covering begins to elongate, while the female's remain circular. Males molt a total of four times. Following the final molt, adult male scales emerge from the scale covering as tiny, yellow winged insects. They mate with the females who remain under the scale covering. After about 2 months, crawlers begin to emerge from the females, usually in April; peak emergence is generally in early May. There are usually four generations a year. Summer generations overlap and crawlers are present throughout summer and fall. 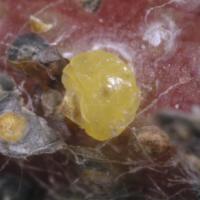 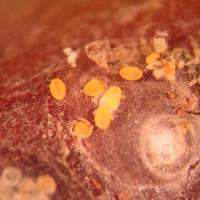 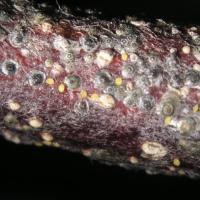