The fungus belongs to the Sclerotiniaceae within the Ascomycetes. The anamorph stage Botrytis cinerea has a worldwide distribution. However, it is not clear how widespread and frequent the teleomorph B. fuckeliana is. It is concluded that sexual reproduction might be an important source of genetic variation.
The fungus grows well on artificial media. The anatomy and morphology of the mycelium of B. fuckeliana are typical of the Ascomycota. Septa are present and are perforated by a simple pore. The mycelium is composed of brownish olive hyphae. Anastomoses between hyphae are often noted. Conidiophores are frequently 2 mm or more long, mostly 16-30 µm wide with often a swollen basal cell. The conidia are ellipsoidal or ovoid, generally with a slightly protuberant hilum. They are dry and hydrophobic, colorless to pale brown, smooth, 6-18 x 4-11 µm (mostly 8-14 x 6-9 µm). In mass the conidia are grey-brown.
Grey mold is a blight or rot of immature, fleshy or senescent tissues. Lesions develop as tan or brown, water-soaked areas, which may become greyish or dried out. The profuse grey-brown sporulation of the fungus on old diseased tissue is characteristic. Buds and young shoots of grapevine may be infected, turn brown, and dry out. On a few leaves reddish brown, necrotic lesions appear on the vines. Before capfall, the fungus may invade inflorescences, which rot and fall off. From these sites it attacks the pedicel or the rachis. From ripening onward, the grapes are infected, especially through wounds. The mold progressively invades the entire cluster. Infected white grapes turn brown, and black grapes become reddish. 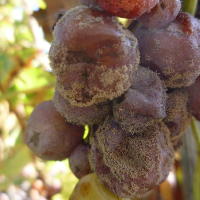 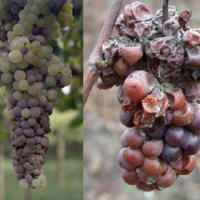 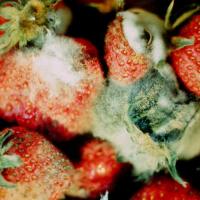 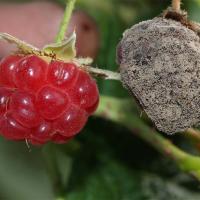 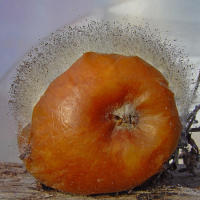