Paterson's curse is an annual, occasionally biennial, herb that grows as a rosette in autumn and winter and produces flowering stalks in spring and early summer. The rosette usually grows parallel to the ground, however the leaves may be erect in dense vegetation.
The stems of Paterson's curse are stout, erect and commonly 30-60 cm tall, but often taller (rarely to 2 m). They are light-green in colour and densely covered with coarse bristles. Stems branch mainly towards the top; often several stems emerge per plant.
Paterson's curse leaves are green to light-green, alternate, thick and densely covered with soft or bristly hairs. Basal (rosette) leaves are up to 30 cm long, are shortly stalked, elliptical-to-oval or paddle-shaped and conspicuously veined. These leaves die off as stem growth increases.
Stem leaves are smaller, strongly haired, stalkless, oblong-to-lance-shaped and heart-shaped at the base, almost clasping the stem.
The flowers of Paterson's curse are located in curved terminal clusters and are funnel-shaped. They are usually purple but may be blue, pink or, rarely, white. The flowers have a calyx of 5 bristly, linear-to-lance-shaped sepals, are 8-11 mm long, elongating to 15 mm in the fruit. The petal tube may be 20-30 mm long with 5 stamens, 2 of which are longer than the other 3 and protrude from the petal.
Paterson's curse plants produce four nutlets, surrounded by the persistent, stiff, bristly calyx.
The seeds of Paterson's curse are dark brown to grey and tough, angular and beaked. They are up to 3 mm long and 2 mm wide, are three-sided, strongly wrinkled and pitted.
Plants can be found in all stages of growth throughout the year, however most of the population follows an annual cycle, with seeds germinating after the first autumn rains and rosettes increasing in size over winter.
Plants begin to produce flowering stalks in late winter, commence flowering in early spring and die in summer. The first mature seeds are produced four to six weeks after flowering commences.Seed can be spread by vehicles and farm implements, water, animals (livestock, birds, ants), on clothing and in hay, silage, wool, soil and commercial seed. Livestock can carry seed in their digestive tract or directly on their coats. 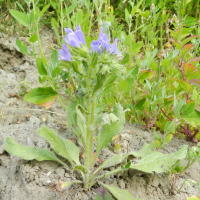 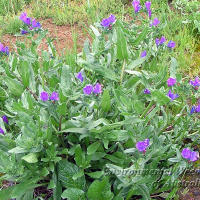 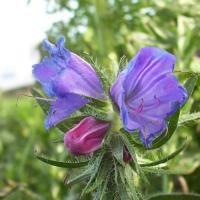 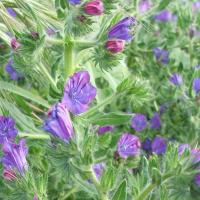